Welcome to Collectorboats.com.  This site is dedicated to the restoration and preservation of vintage / classic boats and the High Performance boat collector.

We want to welcome you to a network of Collector Boat enthusiasts that can help you get your dream completed rather than hauling it to the land fill.

If you want to preserve a piece of boating history, restore and preserve hard to find classic and vintage fiberglass boats and Outboard Motors, Collectorboats.com can help you locate Motor Parts, Propellers, Rigging, Boat Parts and accessories from the 1950s through the 1980s. Learn more about CollectorBoats on the following pages. With a wide range of information to choose from, you'll get help to find exactly what you're looking for!  I am selling my personal longtime collection of boats from Allison, Action Craft, Aeroliner, Baja, Caliber, Checkmate, Critchfield, Crosby, Duo, Fantasy, Glastron, Glastron/Carlson, Glaspar, Hustler, Hydrostream, Larson, Laser, Lee Craft, Sidewinder, SwitzerCraft, Skater, Rapid Craft, Vampire, Yamato and many others. Also Selling my extensive collection of 1950's-1990's Outboard motors by Mercury, Mariner, Johnson, Evinrude, Yamaha, Force, Chrysler, Champion, Elgin, Sea King and others.

I have experience with Boats, Motors Parts and accessories from over 50 years and 3 generations of Boating/Racing. A lot of Boat Racing history with several local and National championships as well as World records. If Speed is your need I have experience with setups from 13 foot boats with 25 horsepower to 33 foot boats with twin HI Performance I/O's or Twin engine outboards running over 100 miles an hour. Check Back often as updates occur continually. I list Boats and motors in original unrestored condition as well as restored pieces. I can help you find a complete package with your choice of boat and motor in as is condition or completely restored units.﻿ I have some listings for complete packages ready to go or projects from all ranges. What ever your budget allows we will help you find a boat you will enjoy for years to come. 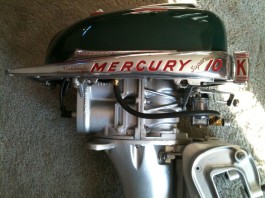 Learn more about the passion for vintage boats and fellow boat collectors projects and collector boats.  We're looking forward to meeting you!

I am from a boating family with 3 generations of experience in the boating industry and boat racing. John Sellner Started it all off with his first boat in the mid 1930s with a home made boat he and his father built in Faribault MN. John spent his childhood racing around on Cannon Lake and continued to build better and faster boats. He started racing in the 1940s and continued into the mid 60s. He took a few years off of racing to raise his family but never gave up having to have the fastest boat around. He owned his own marine store and later worked at several dealers in Minnesota selling boats. John was one of the charter members of Twin City Power Boat Association. He has been an active member in the organization since its start in 1964. He continued to race up until age 82. He continued to follow racing and support his sons Jim and Jerry and his Grandson David and Granddaughter Katie in their racing careers. John has personally owned over 200 boats in his lifetime.

Jim and Jerry grew up on the water and spent most of their childhoods boating on the St. Croix, Minnesota and Mississippi rivers. They started by driving dad's boats then bought their own to go run with John. Jerry started Outboard racing in 1983 and raced both circle and Drag boats up until the 2010 season, winning high points nearly every year throughout his racing career. He won several National championships and set a world record in 2006. Jim started racing in 2000 and his kids David and Katie soon followed. Team Sellner dominated the V-bottom race classes in APBA (American Power Boat Association) and TCPBA (Twin City Power Boat Association).

Where to Find Us:

Contact: 651-214 7712  For best results call during weekends and evenings or by Email. Jerrysellner@yahoo.com

OF BOATS AND MOTORS IS FOR SALE!

NEW Section "Boating Event Photos" Photos from Switzer Craft, Glastron and other reunions and Rally's as well as other Racing events and Boat shows.

Check back often for Classic and Vintage Boating Event updates across the country.

Have a Boating event coming up? Let Collector Boats help you get the word out.

Have a boat for sale? Looking for a particular boat?

Have a boat you think is unique and others would like to see?